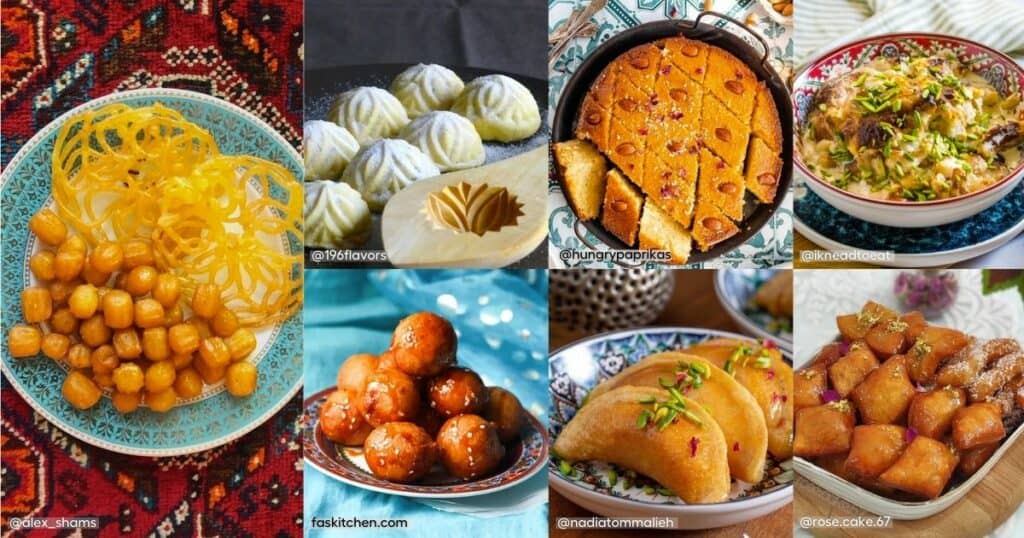 Ramadan is a month of fasting, prayer and self-reflection, observed by millions around the world. It is a time for practicing self-discipline, empathy and compassion.

Those who observe it, fast from dawn to dusk. These fasts are broken by a meal after sunset called iftar (إفطار) or ftoor (فطور) and reinitiated by dawn with a meal called suhur (Arabic:سحور) or sahari/sehri (Persian/Urdu: سحری). The iftar table particularly is a feast for both the eyes and the taste buds, enjoyed by Muslims and their guests from all walks of life.

Here are 7 traditional delicacies from the Middle East that you can spot on iftar/suhur tables around the world. 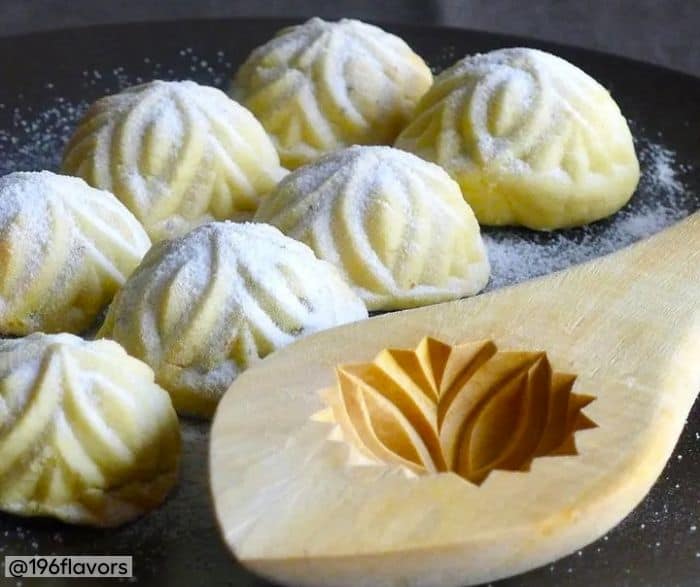 Ma’amoul is a filled semolina cookie popular in the Middle East particularly in Syria, Jordan, Lebanon and Palestine. It is often filled with dates, figs and nuts such as pistachios, almonds and walnuts. It is also prepared in Egypt and Turkey where it is called kahk and kombe, respectively. The word ma’amoul is derived from the Arabic root ‘amila (عَمِلَ) meaning “to do”. 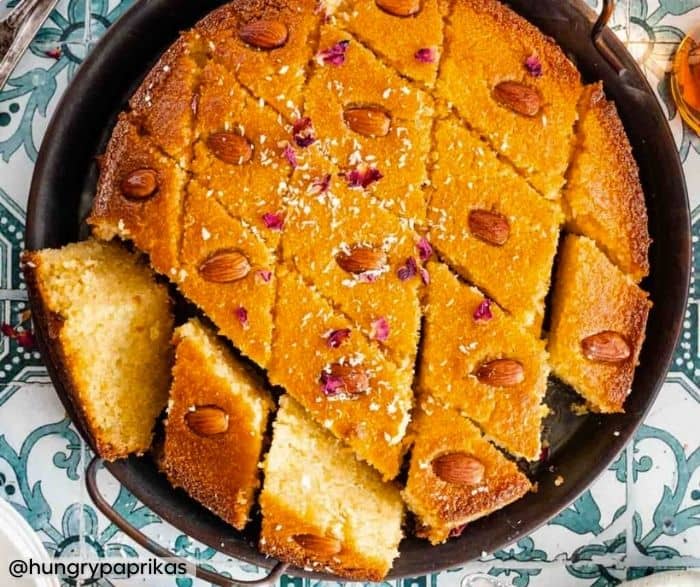 Basbousa is a semolina cake, soaked in syrup, originally from Egypt. Today, it (or a version of it) is found throughout the Middle East (in Levant: harissa “هريسة”), the Caucasus (Armenian: shamali “Շամալի”), and in countries like Greece (ravani “ραβανί”), Turkey (“revani”), Bulgaria (revane “реване”) and Ethiopia (basbousa “ባስቦሳ”). 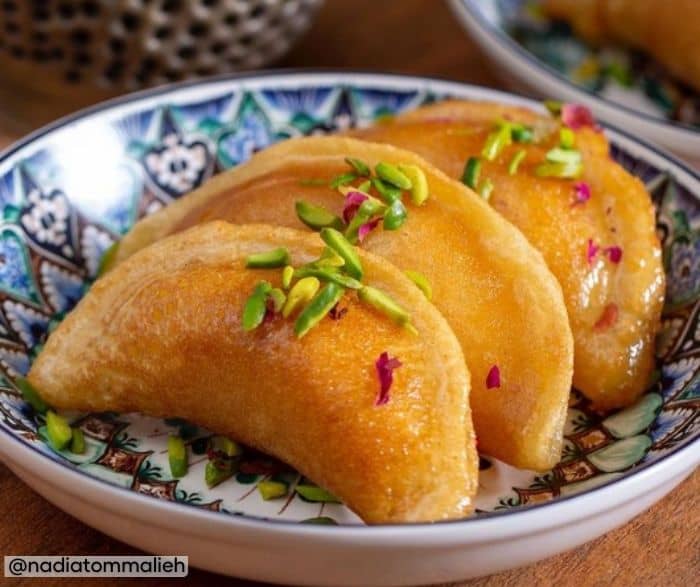 Qatayef is a sweet dumpling made from yeasted batter and filled with cheese and nuts, enjoyed throughout the Levant and Gulf region. A recipe for it is found in the earliest known Arabic cookbook – the 10th century, Kitab al Tabikh (كتاب الطبيخ, “The Book of Dishes”) by Ibn Sayyar al Warraq. The word qatayef is derived from the Arabic root qtf (قطف) meaning to pick or pluck. 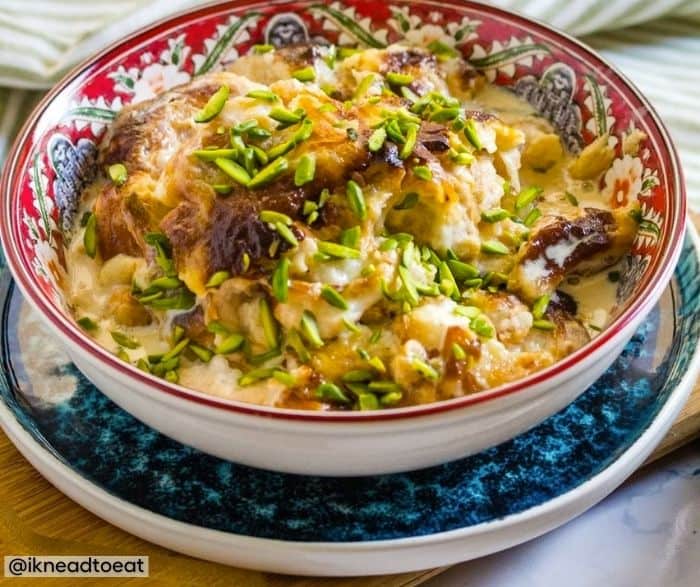 Literally translating to ‘mother of Ali’, this is a traditional Egyptian dessert. Some call it the national dessert of Egypt. Legend has it that it was first prepared in the 13th century at the behest of Om Ali, the first wife of Mamluk Sultan Izz al Din Aybak. It is a speciality at most Egyptian iftar feasts.

A variant of this dish is found in the Jordanian and Iraqi delicacy called “khumaiaa”. 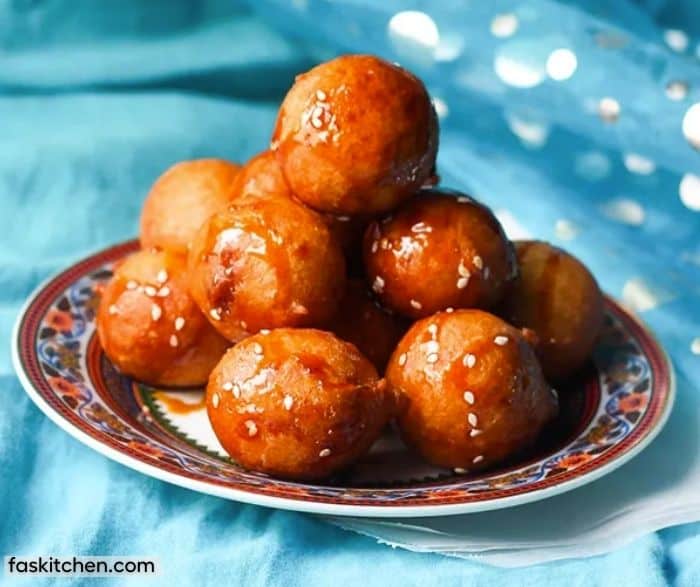 Luqaimat literally translates to “morsel” or “mouthful” and refers to deep fried dough balls, soaked in syrup or honey. This delicacy, sometimes also known as zalabiya (زلابية), is mentioned in several medieval sources such as Ibn Batuta’s travelogue, the famous ‘Thousand One and Nights’ (in the story of the porter and the three ladies of Baghdad), and in the 13th-century writer, al-Baghdadi’s cookbook Kitab al Tabikh (كتاب الطبيخ, “The Book of Dishes”) – where it is called luqmat al-qādi (لقمة القاضي), “the judge’s morsel”. 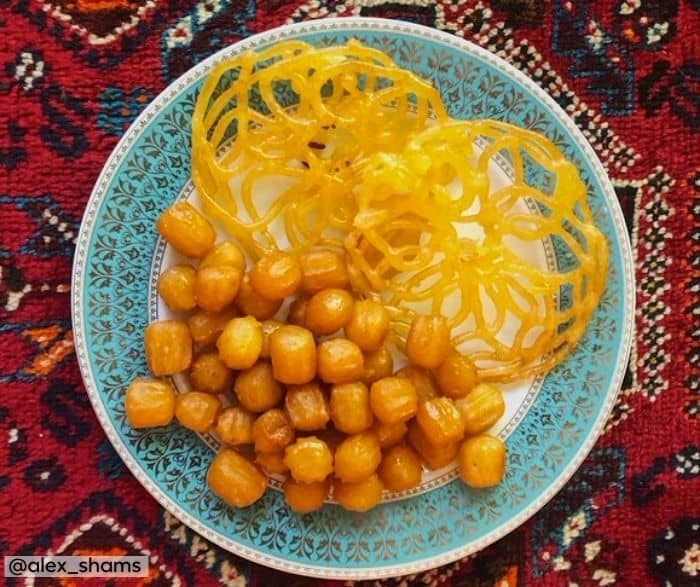 It is a sweet and crunchy Iranian fritter prepared with fermented batter, saffron, sugar and syrup. At iftar tables, they are often found alongside bamiyeh (بامیه), the small donut-shaped bites. The Iranian zoolbia is closely related to the Arab zalabiya (زلابية), another delicacy prepared at Ramadan using fermented batter, sugar and syrup. Recipes for the latter are recorded in both al Warraq’s and al Baghdadi’s cookbooks from the 10th and 13th centuries respectively.

Varieties of this delicacy are also found in South Asia (jalebi), North Africa (zlabia) and the Caucasus (zulbiya or zilviya). 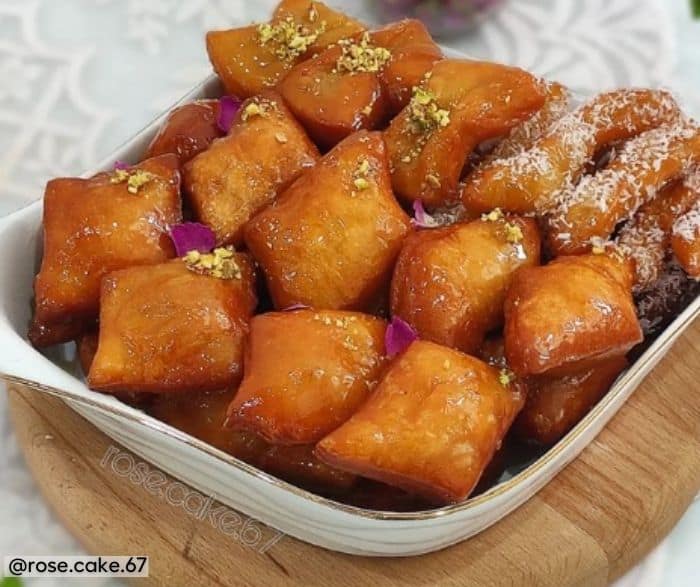 Literally meaning “elephant’s ears”, goosh-e fil is a deep fried pastry prepared in Iran and Afghanistan. They often come topped with powdered sugar and crushed pistachios and are in many ways similar to the Italian dessert named crostoli or chiacchiere. They are particularly enjoyed around Nowruz (Persian new year) and Ramadan.

Learn more about these delicacies and their cultural histories with NaTakallam! Book a session with one of our Arabic, Persian or Kurdish language partners today to delve deeper into the world of languages and everything sweet!

To all learners, language partners, and friends observing this month, Ramadan Kareem (رمضان كريم, “[have a] blessed Ramadan”), remezan pîroz be!

CREDITS
– Copywriting: Maria Thomas is a copywriter with NaTakallam. She is currently pursuing her doctoral studies in art history. In her spare time, she enjoys reading, powerlifting and going on hikes.
– Copyediting: Emmy Plaschy is a volunteer content writer and editor at NaTakallam. She currently works in communications in Switzerland. In her spare time, she enjoys polishing her Arabic skills, writing and gazing at the stars.