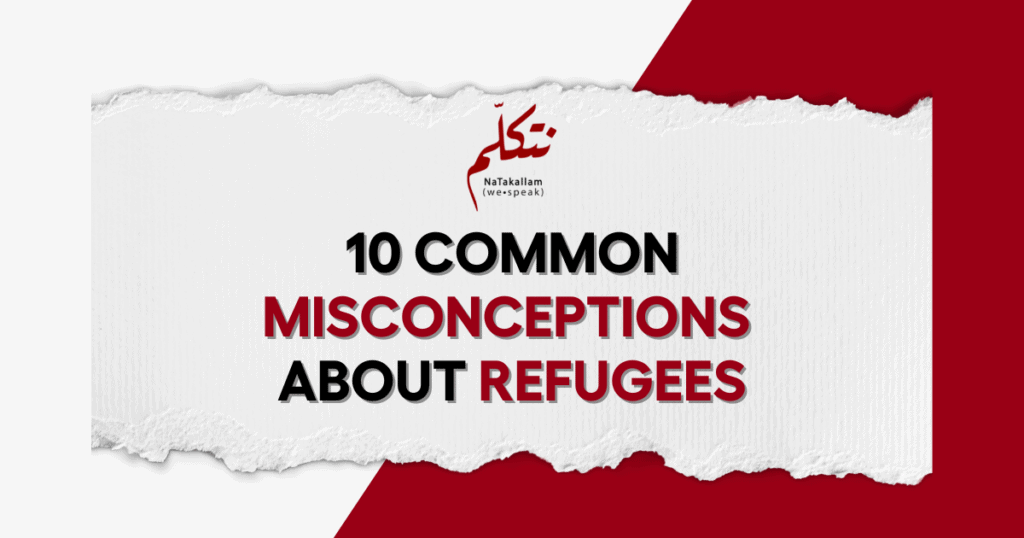 In our modern era of clickbait headlines and 280-character debates, refugees often suffer from negative stereotyping and popular misconceptions like so many other marginalized communities.

NaTakallam’s tutors, teachers, interpreters, and translators come from diverse personal and professional backgrounds – each with unique skills and experiences that are often misconstrued by simplistic generalizations.

NaTakallam is committed to unpacking facts from fiction. We seek to reshape and reclaim narratives about refugee and displaced populations and promote understanding through fact-based discussions.

This World Refugee Month, NaTakallam hopes that employers and communities around the world will continue to work towards a better understanding of the rich contribution that individuals impacted by displacement can offer their communities and workplaces. 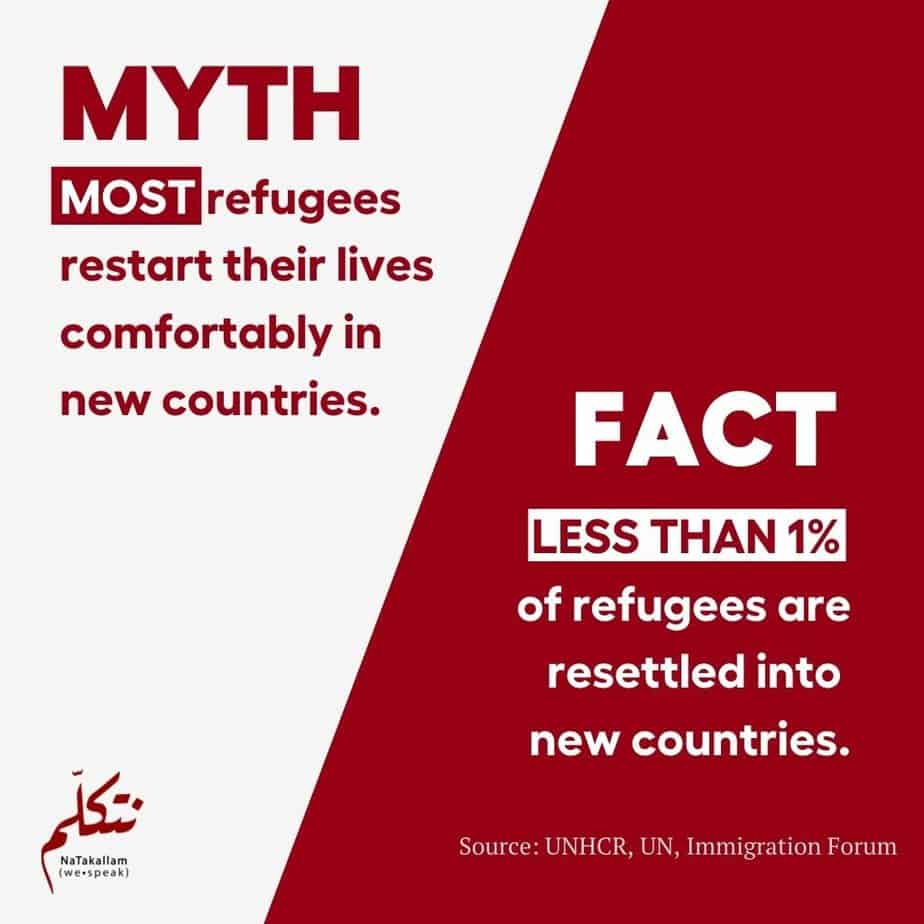 Myth 1: Most refugees restart their lives comfortably in new countries.

Fact: Less than 1% of refugees are resettled into new countries.

Resettlement is still a rare phenomenon, even though millions are eligible. In 2020, resettlement numbers hit a record low in the past two decades, according to a UNHCR report. Even though the US increased their refugee ceiling in 2021 to 62,500, a total of only 11,411 were resettled in the fiscal year – a mere 18% of the announced target. Even if successful, the resettlement process often takes years, and the journey of starting life anew in a foreign country can be extremely hard, especially in the face of new legal and educational systems, foreign languages, and cultural norms.

NaTakallam works with skilled refugees who are often stuck in limbo, cut off from local labor markets, in camps or other transit circumstances. Therefore, each language session with NaTakallam makes important and meaningful contributions to their livelihoods and overall sense of belonging. 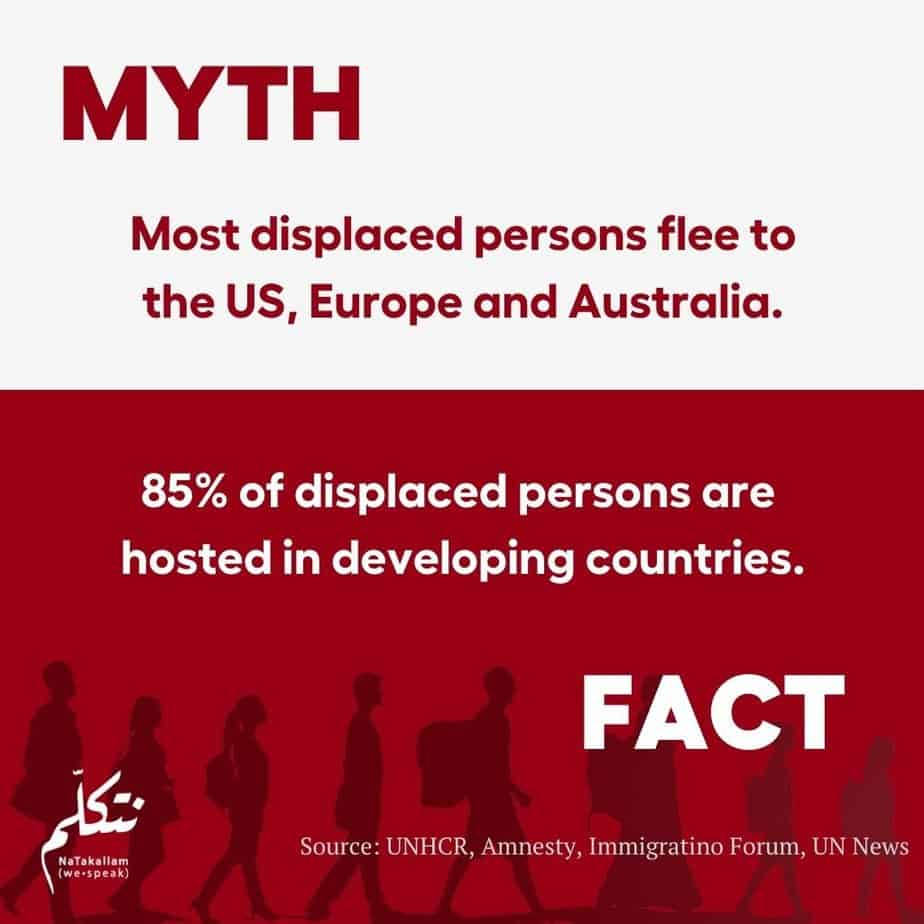 Myth 2: Most displaced persons flee to the US, Europe and Australia.

Fact: 85% of displaced persons are hosted in developing countries.

Contrary to common belief and misleading headlines, only a small fraction of resettled refugees are hosted in developed countries of the West. Though there are around 100 million forcibly displaced people in the world, the US 2021 immigration cap was 62,500, of which only 18% of the quota was realized. In 2020, the entire EU accepted less than 200,000 refugees. Most are forced into limbo states, with no legal residency or work status.

The majority of displaced persons that NaTakallam works with have fled to neighboring developing countries. Top host countries include Turkey, Colombia, and Uganda, which as of mid-2021 host 3.7 million, 1.7 million, and 1.5 million refugees, respectively. 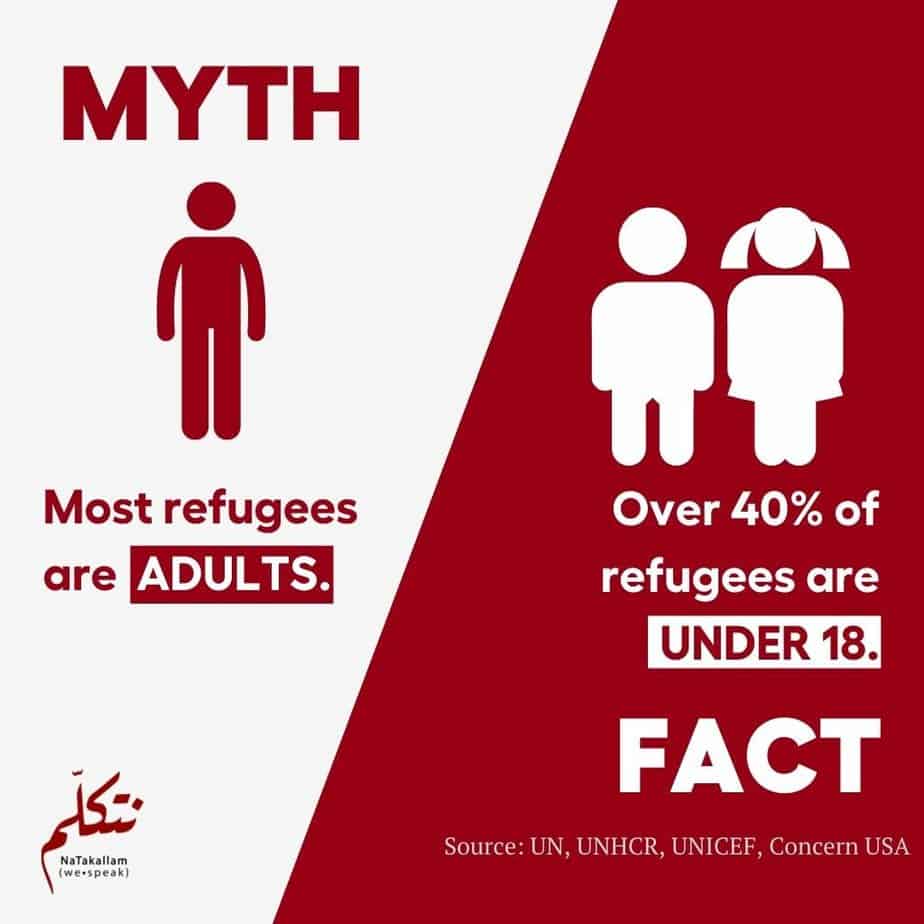 Myth 3: Most refugees are adults.

Not all refugees are adults. According to the UNHCR, an estimated 36.5 million of the world’s 100 million displaced people are under the age of 18. Furthermore, an estimated 12.5 million of the 27.1 million refugees are child refugees. Between 2018 and 2020, an average of between 290,000 and 340,000 children were born into a refugee life per year. Today, there are over 1 million children in the world who were born as refugees.

This demographic breakdown holds true for almost every regional crisis. Though children make up about a third of the global population, they constitute 50% of the world’s refugees. This dynamic is a significant concern, as contemporary child migration is often inhumane, unregulated, and dangerous. Moreover, an additional obstacle for refugee children seeking asylum is the fact that many of them go through this process without adult support. 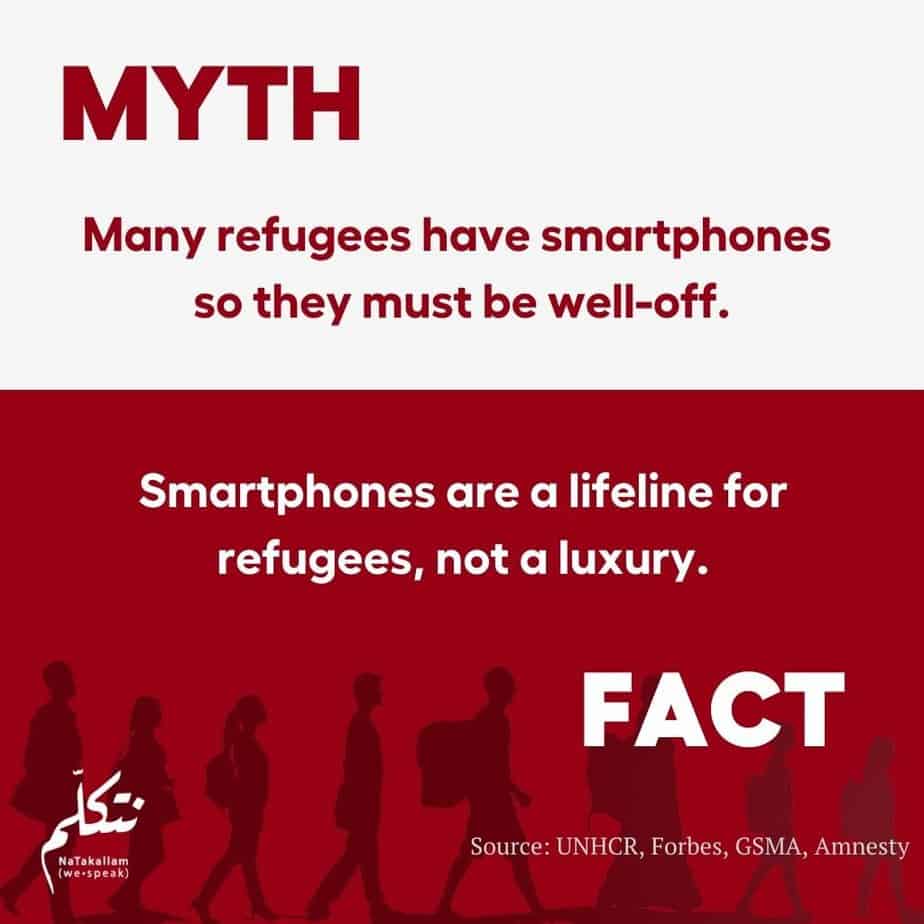 Myth 4: Many refugees have smartphones so they must be well off.

Fact: Smartphones are a lifeline for refugees, not a luxury.

For refugees, smartphones provide access to essential and potentially life-saving information. Smartphones are used to find food, shelter, and assistance, navigate new areas, communicate with loved ones, and even earn a living through virtual work. Refugees often spend up to a third of their disposable income to afford connectivity and opportunities that come with a smartphone, according to Amnesty International.

In the era of what some have dubbed “the connected refugee,” NaTakallam provides opportunities for refugees to work as online language tutors, interpreters, and translators for users worldwide. 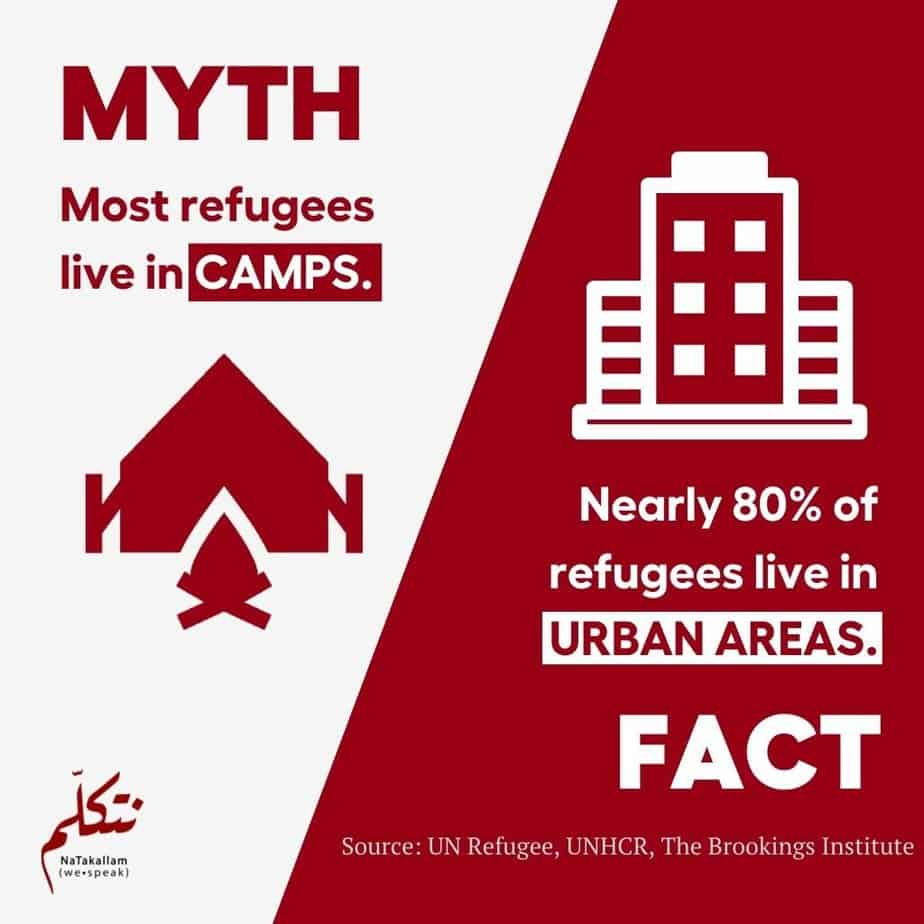 Myth 5: Most refugees live in camps.

Contrary to the frequent images of sprawling refugee camps in the media, almost 80% of refugees live in urban areas. This has presented a new set of challenges: resources are often less concentrated and humanitarian assistance is less plentiful, meaning that individuals can miss vital information and aid more easily.

NaTakallam works with displaced persons in both urban areas and refugee camps to ensure no one is marginalized due to their current circumstances. We leverage technology in a way that ensures accessibility for all users. 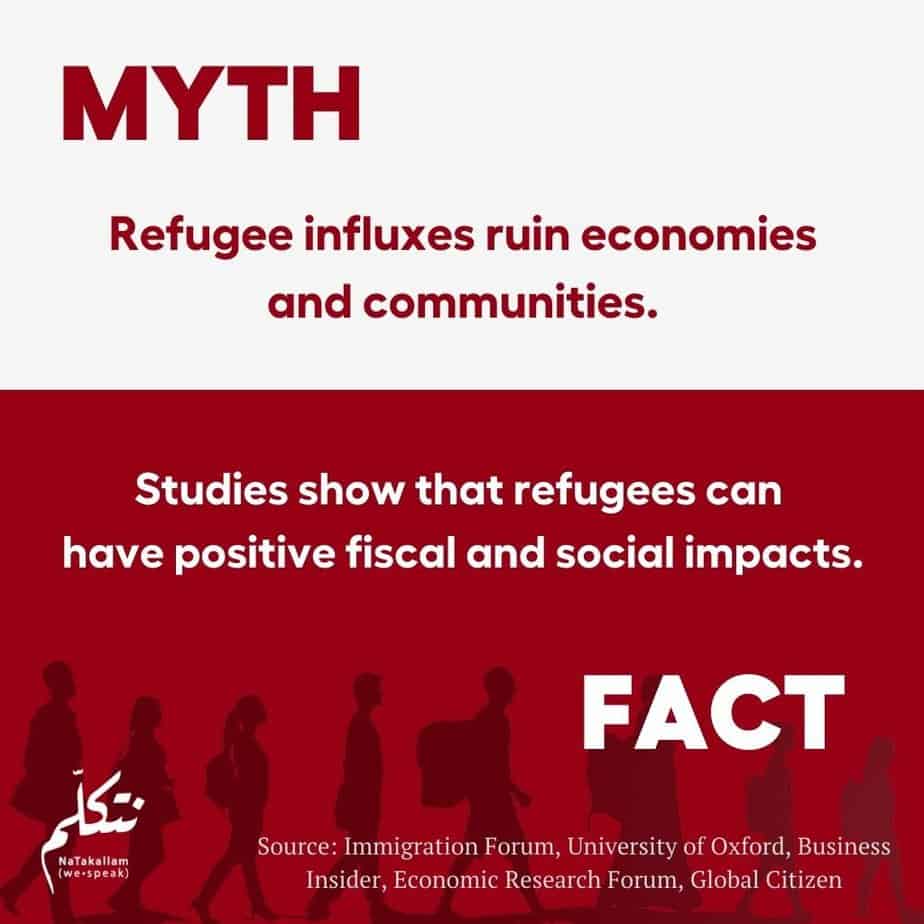 Fact: Studies show that refugees can have positive fiscal and social impacts.

The notion that admitting refugees will ruin a host country’s economy is rooted in false economic beliefs. Over time, it has been shown that refugees actually add more value to the economy than the initial cost of resettlement – if they are granted the right to work legally. Moreover, studies show that low-skilled foreign workers and low-skilled domestic workers tend to complement each other rather than compete. In the US, refugees add billions to the economy, and experts assert that they will play a vital role in helping economies recover after the pandemic.

What is more, contrary to political narratives, studies consistently show that refugees are less likely to commit crimes, engage in “antisocial” behavior, or be arrested. In fact, higher immigration is generally associated with much lower crime rates.

Many of NaTakallam’s displaced tutors are barred from local employment due to legal restrictions – leaving them vulnerable to the black market and unsafe work. NaTakallam allows refugees to make an income legitimately and safely, regardless of their location. 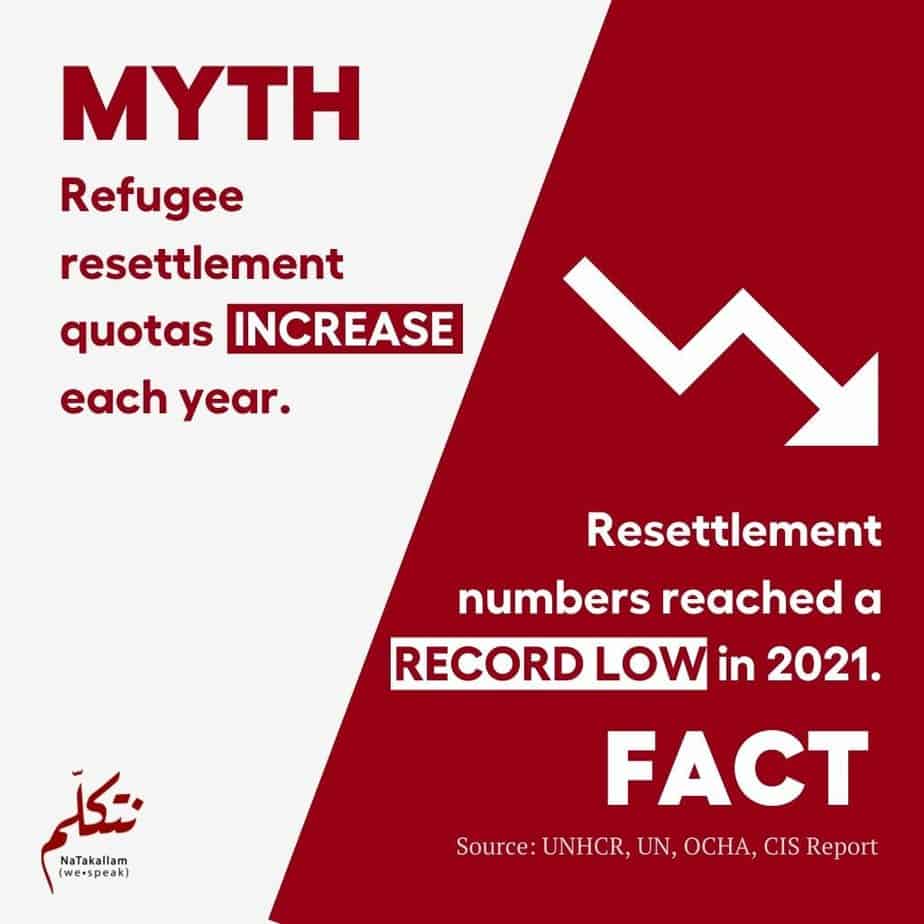 Each year, resettlement quotas are subject to change. In 2020, the UNHCR resettled about 22,770 refugees, which represents only a third of the refugees resettled in 2019 and less than a fifth of those resettled in 2016. According to the UNHCR, this figure was the lowest in two decades. Undoubtedly, the unprecedented impacts of the pandemic contributed to a decrease in resettlements; however, these statistics still help to illustrate the precarity of many refugees’ situations. Equally troubling, the US froze resettlement and humanitarian assistance to refugees during the pandemic.

By leveraging the digital economy, NaTakallam enables tutors and translators from displaced backgrounds to earn livelihoods through language services – particularly during the pandemic. 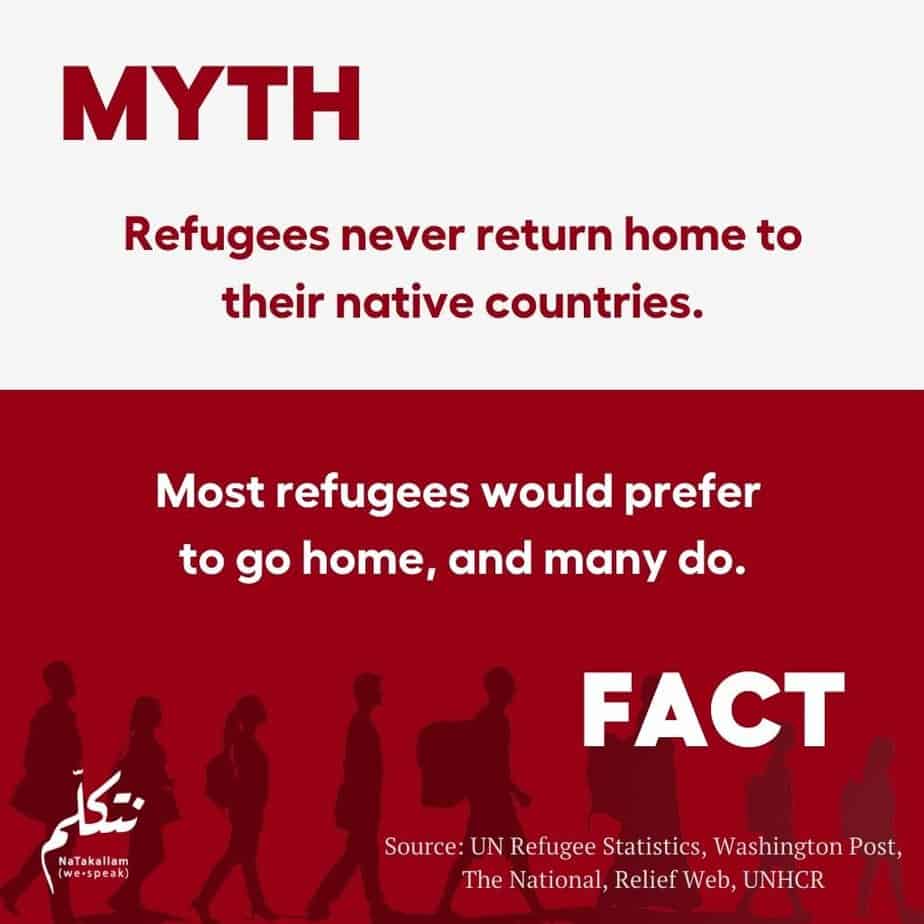 Fact: Most refugees would prefer to go home, and many do.

Popular narratives paint refugees as “economic migrants” who come to profit from the opportunities of more developed countries and never return to their home countries. This is a misconception. According to various surveys done across the world, most refugees are understandably reluctant to go home when the situation remains unsafe. However, from a sample survey of 1,100 displaced Syrians, an overwhelming majority, around 73%, say they would return home if the conditions were right.

Another report showed that in 2019 alone, 46,500 refugees voluntarily returned to the Central African Republic. What refugees seek is physical safety, dependable work, and sustainable housing, and the majority agree that if this were available in their home country, they would return. NaTakallam enables refugees to have reliable, consistent work as language tutors and translators in Arabic, Armenian, English, French, Kurdish, Persian, Russian, Spanish, Ukrainian and more. 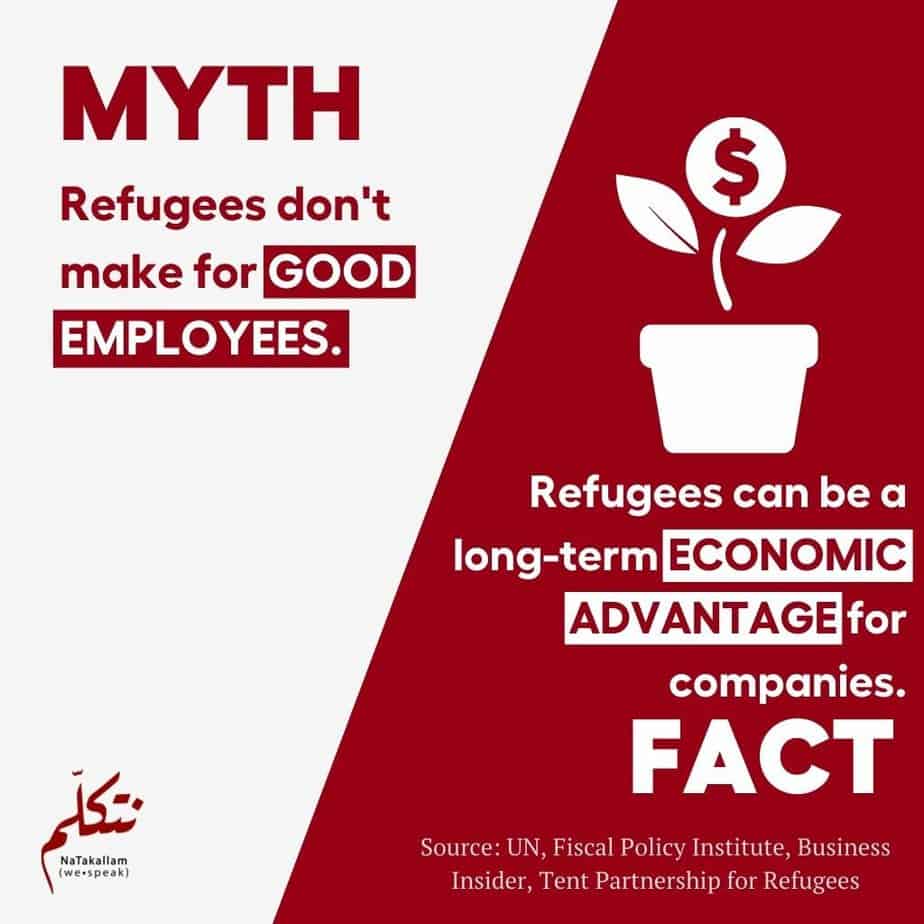 Fact: Refugees can be a long-term economic advantage for companies.

Employers say it best: when it comes to refugees, “they come to work and get the job done.” Research from the Fiscal Policy Institute (FPI) in 2018 highlights that in addition to being hardworking, refugees often stay with their employers for longer and speak a foreign language – a highly desirable skill for any global company.

Furthermore, in a Tent Partnership for Refugees report (also backed by the FPI), many businesses that hired refugees stated that they were among their most dedicated workers. Employee turnover rates were much lower among refugee employees than in the general population – thus, saving businesses money. 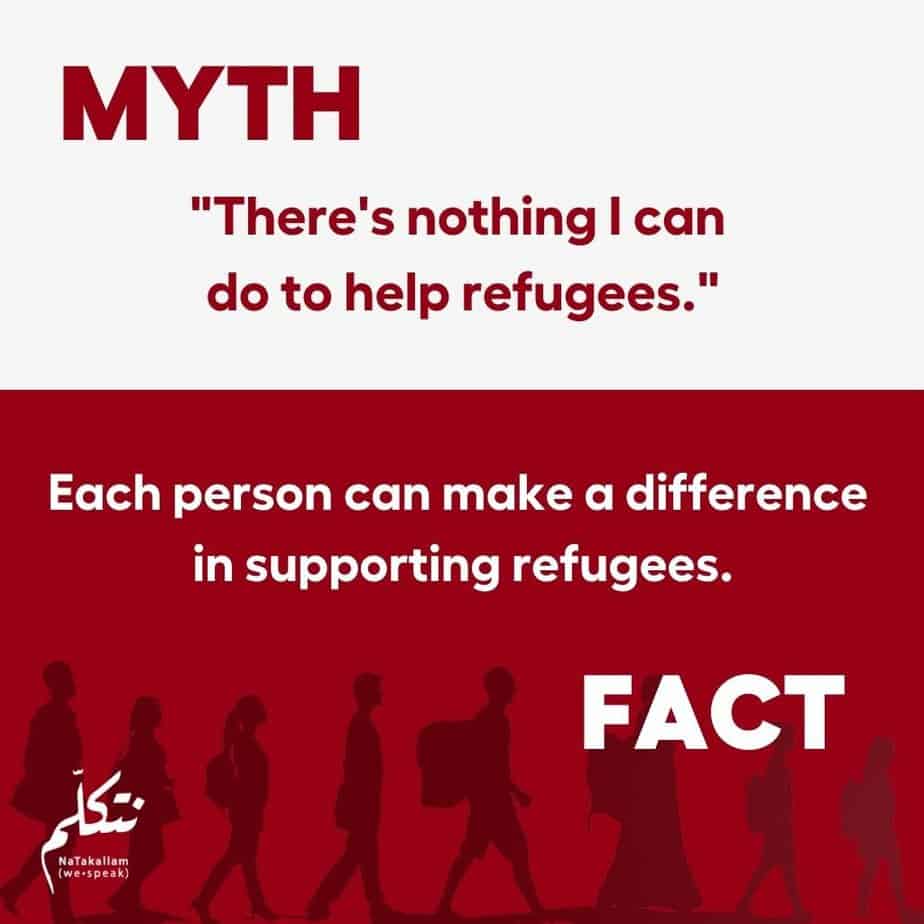 Fact: Each person can make a difference in supporting refugees.

Everyone can do something. Whether it is welcoming refugees into your own community, raising awareness about the cause, or supporting refugee-centered organizations, you have the power to make an impact beyond donations.

And if you are looking to support refugee livelihoods directly, amidst the fastest-growing displacement crisis of our time, consider bringing NaTakallam into your home, classroom, or office setting for your language-learning, cultural exchange, or translation needs. Change a life, one refugee at a time. 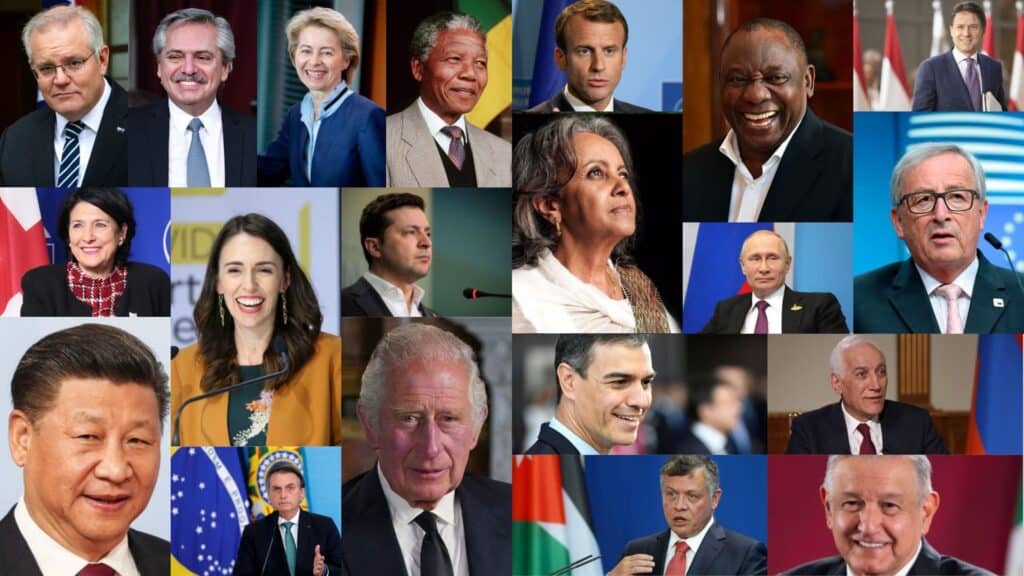 Language is not just a series of words. Language is a vehicle and catalyst for the creation of dialogue between diverse communities and an invaluable cornerstone of peacebuilding. As the human rights champion and Noble Peace Prize recipient, Nelson Mandela, summed it up, “If you talk to a man in a language he understands, that goes to his head. If you talk to him in his own language, that goes to his heart.”

In the aftermath of a global pandemic as well as new and ongoing wars, political leaders and diplomats around the world are under increased scrutiny and pressure. Besides fostering understanding, being multilingual is simply good practice for anyone in the international diplomatic sphere.

With the US as a global leader, one would think its presidents would have some sort of international inclination, yet only 20 out of 46 (43%) US presidents spoke a second language.

Both former US President, Donald Trump, and the current sitting President, Joe Biden, are monolingual, as is the President of Brazil Jair Bolsonaro, China’s Xi Jinping, and Abdel Fattah el-Sisi of Egypt.

Today, some of the most well-known leaders of English-speaking countries – the United States, Australia, and New Zealand – are monolingual, even though Jacinda Ardern, from New Zealand, apparently wishes she had learned Maori and has promised to raise her daughter speaking the indigenous language.

At NaTakallam, language doesn’t stop at syntax. It opens doors to new cultures, builds empathy, and fosters intercultural understanding. Multilingualism can provide an avenue for effective communication, conflict prevention and diplomacy, helping avoid misunderstandings, and perhaps even prevent wars and conflict from escalating.

Multilingual world leaders are of course not without fault, but let’s take a look at the panoply today:

9. Vladimir Putin (Russia): Russian, German, and a little English (we specify – a little…)

Studies have shown that learning a foreign language directly correlates to the learner’s ability to empathize with and enhance understanding towards the speakers of that language and subsequently, their culture. Multilingualism fosters cross-cultural connection to the benefit of everyone involved. Language learner Katie Santamaria, emphasizes that, “Understanding each other’s intricacies [..] is an opportunity that shouldn’t go to waste.”

In an increasingly divided world, cultural understanding and shared respect can destroy the walls our world leaders try (and fail at) building.

We wonder… how might US and global policies change if world leaders were required to be culturally and linguistically competent in a foreign language?

Whatever languages you speak (or are looking to start studying), the role of language – as a means of communication and as an expression of identity – is a vital consideration for any serious discussion of peace and security.

In honor of World Peace Day, and beyond, walk the talk and talk the walk, in multiple languages with NaTakallam.

Yalla, vamos, on y va! What are you waiting for? Choose from Arabic, Armenian, English, French, Kurdish, Persian, Spanish, Ukrainian or Russian… and learn a language, the NaTakallam way!