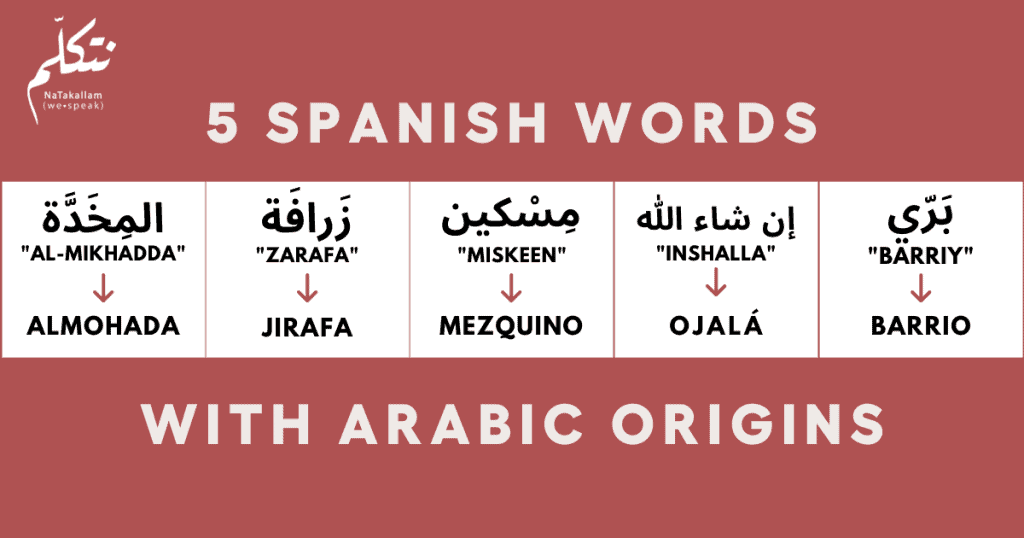 We have all learned and witnessed how languages evolve over time and geography. The roots of a language are often tied to their region of origin, their birthplace so to speak. The European Romance languages such as French, Spanish and Italian evolved from Latin while the Semitic languages such as Arabic, Amharic and Hebrew all originated in the modern day Middle East.

That said, languages are full of complexity, often interacting in dynamic and organic ways. For instance, traveling through Spain, it is near impossible to avoid local vocabulary and names derived from… Arabic! The influence of Arabic on Spanish language (and culture!) largely originates from Muslim rule in the Iberian Peninsula between 711 and 1492 AD.

Because the origins of words can be fascinating… Here are our top five Spanish words borrowed from Arabic!

Has indoor time and chilly fall weather got you snuggling up more these days? Spanish speakers owe their good night’s sleep to Arabic! Almohada comes from المخدة (al-mikhadda), meaning cushion or pillow – and potentially one of our favorite quarantine objects. And it inspired Palestinian writer Mourid Barghouti’s beautiful poem.

According to Oxford Languages, the earliest recorded origin of the word “giraffe” – “girafe” in French” and “jirafa” in Spanish – is actually from Arabic, زرافة (“zarafa)”, which roughly translates to “fast walker” – nothing to do with its height nor its distinctively long neck!

Did you know the Spanish word “mezquino” meaning “stingy” or “petty” is derived from Arabic’s مسكين (miskeen) meaning “poor” or “miserly”? Si! The Arabic word itself is a loanword from Akkadian, the oldest known Semitic language, spoken in ancient Mesopotamia (modern day Iraq).

“Ojalá”, which means “hopefully” or “let’s hope so”, comes from the Arabic phrase “inshallah”, which means “God-willing” and is also used in Arabic to reflect the hope that something will happen. Nowadays, it is used by all Arabic speakers, regardless of faith groups.

The word “barrio”, meaning neighborhood, actually originates from the #Arabic word “بري” (barriy) which refers to the outside or the exterior. This year we’ve definitely learned to love and value both barrio and بري a whole lot more than earlier!

Fascinated by etymology and languages? Look no further. With NaTakallam, pick up Spanish and/or Arabic with our native tutors from displaced and refugee backgrounds! Sign up here.