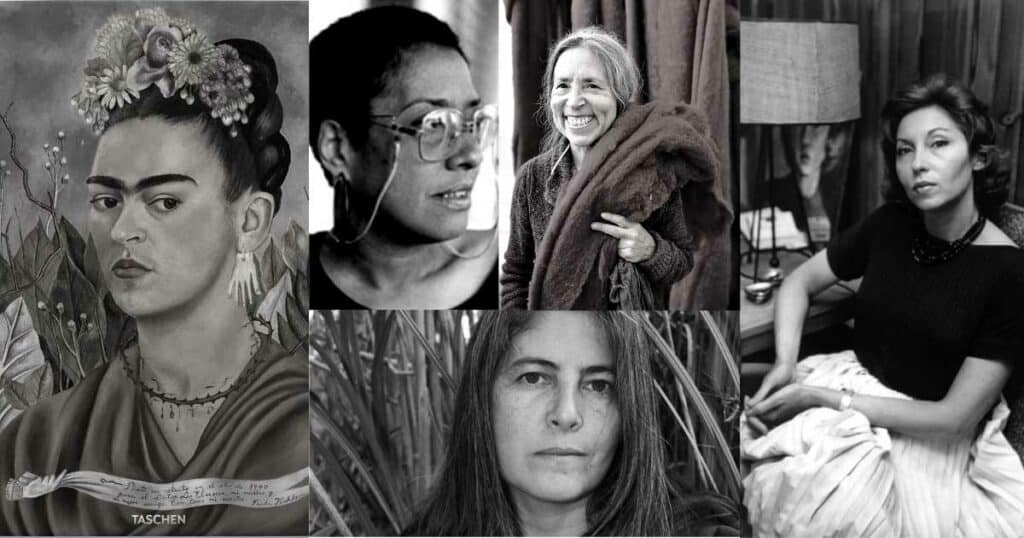 Women’s History Month or any day of the year, here are 5 Latin American feminists you need to know and celebrate!

Frida Kahlo was a Mexican artist known for her paintings that explored themes of female subjectivity, sexuality and marginality. Through her highly symbolic canvases, many of which were built around her own self-portraits – for example, Self-Portrait with Cropped Hair, Self-Portrait with Thorn Necklace and Hummingbird – Kahlo eschewed gender stereotypes and gave voice to often taboo aspects of femininity.

Excilia Saldaña was an award-winning Cuban essayist, poet, translator, academic and author of children’s books. Her works – including the book, La Noche (‘The Night’), poems such as My Name (A Family Anti Elegy) and short stories like Kele Kele – were very important contributions to the creation and consolidation of a tradition of Afro-Hispanic women writers and artists.

Cecilia Vicuña is a Chilean poet and multidisciplinary artist. Her works, which include collections of poems such as Precario/Precarious (1973) and Unravelling Words and Weaving Water (1992), and art installations such as Could-Net and Quipu Menstrual, are grounded in her understanding that the political, environmental and indigenous are inherently connected and must be addressed as such. Also, central to Vicuña’s works are her explorations of the connections between gendered injustice and environmental despoliation.

Selva Almada is an Argentinian writer who is considered one of the most powerful voices of contemporary Argentinian and Latin American literature. She is also recognised as one of the most influential feminist intellectuals of the region. Her works, particularly her book,  Dead Girls – originally published originally in Spanish as Chicas Muertas in 2014 – highlight issues such as gendered violence, femicide and the legal inadequacies of Argentinian legal systems in addressing them.

Clarice Lispector was an Ukranian-born Brazillian novelist and short-story writer. Her family fled Western Ukraine to escape the pogroms that followed World War I and the Russian Civil War. Her works written in Portuguese include short story collections such as Laços de família (‘Family Ties’) and Para não esquecer (‘Not to Forget’), and novels such as Perto do coração selvagem (translated and published in English as Near to the Wild Heart), A Paixão segundo G.H. (translated and published in English as The Passion According to G.H.). French feminist writer Hélène Cixous credits her works with “exploring women’s identity with a depth that no one has achieved until now”.

Learn Spanish and explore the worlds of these inspirational women with NaTakallam!

We are a women-led and women-fueled community that offers language sessions in Spanish, among other languages. Our Latin American native language tutors are individuals who have been displaced from countries like Venezuela, Nicaragua, and Guatemala, and are currently resettled in neighboring countries such as Uruguay, Costa Rica, the United States, Ecuador, Trinidad and Tobago, and Argentina.

Brush up your Spanish skills, delve into Latin American cultures and experiences, and celebrate these incredible women, today and everyday!

This piece was contributed by Maria Thomas, a copywriter with NaTakallam. She is currently pursuing her doctoral studies in art history. In her spare time, she enjoys reading, powerlifting and going on hikes.