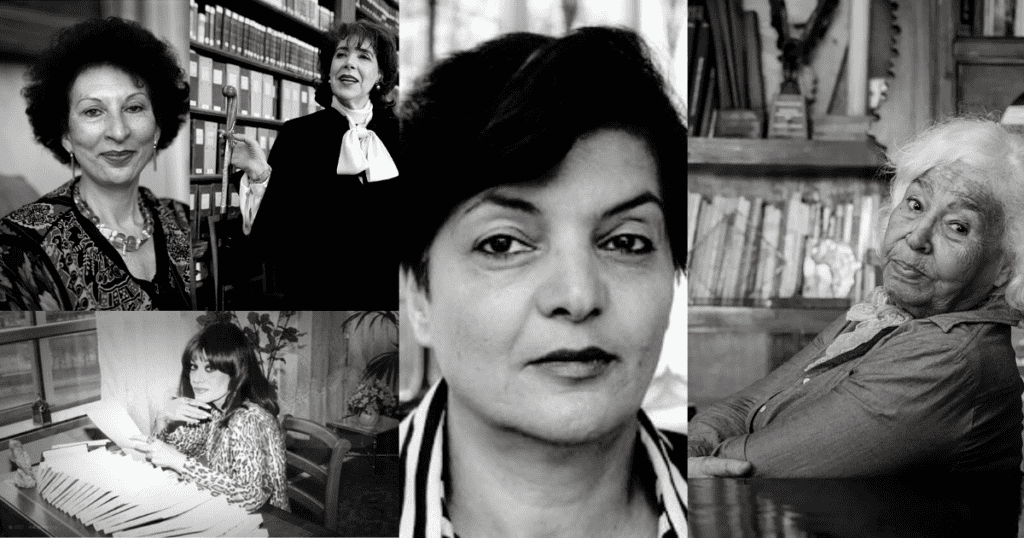 NaTakallam is marking International Women’s Day and Women’s History Month by highlighting some of history’s most celebrated feminists. This week, join us as we take a look at 5 incredible Arab feminists we all need to know.

Nawal El Saadawi was an Egyptian feminist writer, activist and physician. Her works such as The Hidden Face of Eve (الوجه القاري للمرأة العربية, Al-Wajh al-qari lil-mar’a al-‘arabiyyah), A Daughter of Isis, and Memoirs of a Woman Doctor have over the years become a cornerstone of Arab feminism. In Saadawi’s own words, her writing was a weapon which she exercised against the autocratic power of state and that of the father or husband figure in the family.

‘‘The written word is an act of rebellion, against injustice exercised in the name of religion, or morals, or love.’’ – Nawal El Saadawi (A Daughter of Isis)

Professor Fatema Mernissi was a Moroccan writer and sociologist. Her works include her revolutionary book Beyond the Veil (1975), a fictional memoir, Dreams of Trespass: Tales of a Harem Girlhood (1994), and The Forgotten Queens of Islam (1990). Her scholarship thwarts the popular notion that female subordination is rooted in religious texts and argues that this misunderstanding ‘‘sprang from centuries of misinterpretation by male leaders intent on maintaining the sexual status quo’’. Mernissi was a pioneer of Islamic feminism and inspired Muslim women, especially those from humble backgrounds, in their struggles for human dignity, equality and social justice.

Sahar Khalifeh is a Palestinian writer known for her gripping novels such as Wild Thorns (الصبار, Al- Sabaar), The Inheritance (الميراث, Al-Mirath), and My First and Only Love (حبي الأول, Hubbi al-Awaal). Her writings focus on female characters with strong personalities. She masterfully connects the plight of the nation with that of women, pointing out that the devaluation of women obstructs nationalist ambitions.

‘‘I could see very clearly that the debacle of 1967 was the fruit of a rotten tree that needed a cure – the internally defeated do not triumph. The cure must start with our households and with those in power, with our social values and ties, with the fabric of the family, with the rules and basics of the upbringing of the individual at home, in school, and at university, and then progress to the street.’’ – Sahar Khalifeh (My Life, Myself, and the World)

Ghada al Samman is a Syrian journalist and novelist, best known for her sublime short stories. Her writings are collected in volumes such as عيناك قدري (Aynak qadiri, ‘‘Your eyes are my destiny’’), لا بحر في بيروت (La bahar fi Beirut, ‘‘No sea in Beirut’’), and  رحيل المرافئ القديمة (Rahil al-marafi al-qadima, ‘‘The departure of the Old Ports’’). She also wrote two novels – Beirut Nightmares ( كوابيس بيروت, Kwabis Beirut) and ليلة المليار (Laylat al-milyar, ‘‘The Eve of Billion’’). Samman’s works are a bold commentary on contemporary social and political realities. She established the Ghada al Samman Publications in 1977 to publish her own writings free of editorial interference and censorship.

Assia Djebar was an Algerian writer, translator and filmmaker. She is known for works such as La Soif (“The Thirst”), Les Enfants du Nouveau Monde (‘‘Children of the New World’’), and Fantasia: An Algerian Cavalcade (original title: L’Amour, la fantasia). Although her writings are not in her mother tongue – Arabic, she had a keen interest in the language and used French to ‘‘reproduce Arabic rhythms’’. Her writings explore the struggles she knew both as a feminist living under patriarchy and an intellectual living under colonialism and its aftermath.

Learn Arabic and explore the writings of these incredible women with NaTakallam! We are a women-led and women-fueled community that offers language sessions in Modern Standard Arabic and 7+ dialects. This March, receive a $25 credit in NaTakallam language sessions to gift to a woman, loved one, or yourself, with every language purchase of 5 hours or more!

This piece was contributed by Maria Thomas, a copywriter with NaTakallam. She is currently pursuing her doctoral studies in art history. In her spare time, she enjoys reading, powerlifting and going on hikes.