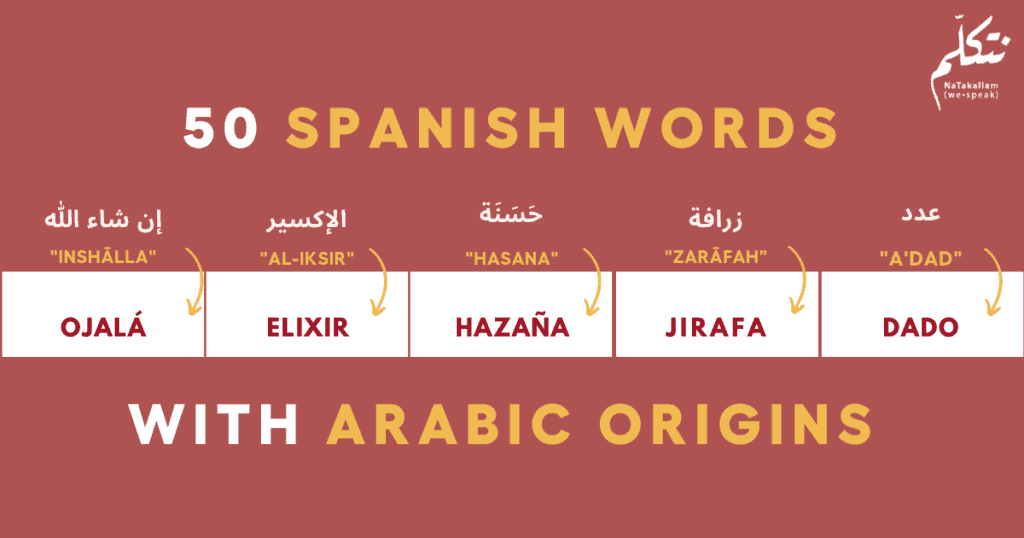 The Spanish language and culture has traveled to different corners of the world, interacting with diverse communities throughout Latin America, parts of the US, the Caribbean islands, Europe, and even in Africa and Asia! Spanish is the official language in over 20 countries, one of the six official languages of the United Nations, and currently the fastest-growing language with more than 580 million speakers worldwide. Given its Latin roots, it is also a familiar language for learners and speakers of other Romance languages, such as French, Italian and Portuguese.

But did you know… about the impact of Arabic over the Spanish language? That’s right! The influence of Arabic on the Spanish language, mostly through loanwords, largely originated from the Arab rule in the Iberian Peninsula between 711 and 1492 AD, notably in Al-Andalus (الأَنْدَلُس) of southern Spain, referred to as Andalusia, today. As a result, there are approximately 4,000 Spanish words with Arabic origins, to date!

Travel back in time with our top 50 favorite Spanish words that have come from Arabic.

Want to dive deeper into language and etymology? NaTakallam can help you with that! Our language partners from refugee or displaced backgrounds can help you pick up Spanish and/or Arabic, while also providing you with a cultural experience that will help you transcend borders.

Whether you’re a Spanish or Arabic learner, or simply a language enthusiast, learning a language with NaTakallam you will get to experience the beauty and interrelated nature of the linguistic world. Sign up here, today.